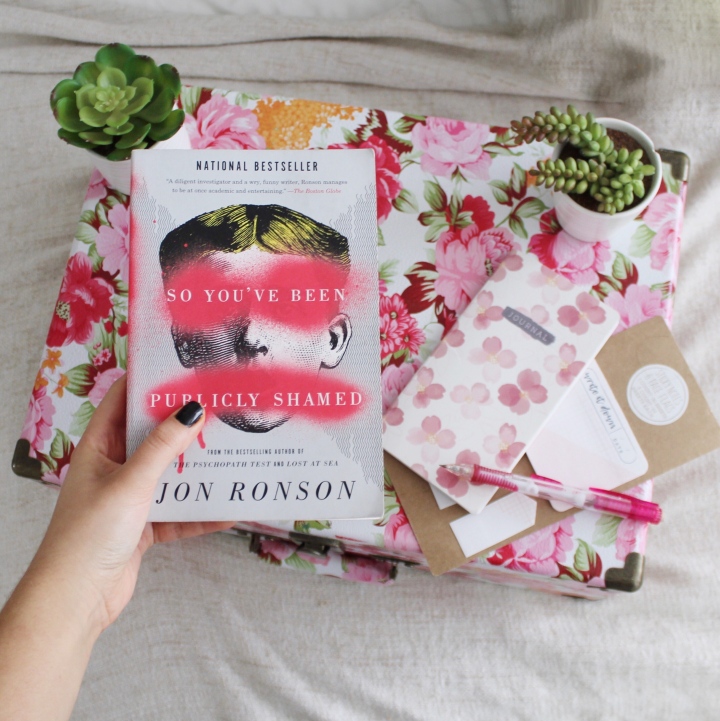 We are defining the boundaries of normality by tearing apart the people outside of it.

My gripe with nonfiction is that the word itself sounds boring. It’s not something, therefor my brain develops a negative association with it. As a result, I often trick myself into thinking I don’t like or enjoy the genre. When in reality I tend to have a good ole nerdy time learning about– and becoming fascinating by– ideas, experiences, and notions.

With that said, the first half of this book was no exception. I was utterly engrossed from the get-go. So You’ve Been Publicly Shamed follows a collection of stories, or rather thought processes, on the mob mentality we as a society have developed on the internet. It details the ways in which we’ve torn people apart by mistakes they’ve made on social media, like a poorly construed joke, or in real life, such as plagiarism, a leaked sex tape, etc. As a result, lives are ruined as the perpetrators (or perhaps victims?) are publicly shamed online leaving a trail that often gets them discredited, fired, and targeted.

One of the main things I appreciated about Ronson’s work was his casual, and at times comical, tone. It eases those in who are weary of non fiction by letting them know this is just a conversation being had and no pop quiz will follow afterward. In the beginning, I thought it would become a favorite and get a fairly high rating of either four or five stars.

However, as captivating as the first stories were, the book does start to lose steam around the halfway mark. Meaning, that given the book’s casual tone, Ronson often gears off path and takes you places that aren’t necessarily that interesting or seem to deal with a different subject altogether.

One of the main things that hindered my rating and most irked me was Ronson’s refusal to let Justine Sacco’s part of the story go. She was mentioned at almost every stop throughout the book when, to be frank, I didn’t find her story compelling enough to be prolonged. For context, Sacco made an ill-fated joke, “Going to Africa. Hope I don’t get AIDS. Just kidding. I’m white!” As a result, she faced severe, if not unwarranted, repercussions. Such as getting fired and receiving numerous death and rape threats.

The thing is, I felt her involvement in the story was because Ronson had a personal stake in it. I think Ronson saw her as a mirror. It seems he believes her joke was judged world wide because of her choice of wording. See, Ronson himself made a joke, that he considers successful, in the past that ran in the same vain as Sacco’s. Once, he wrote an article about being chosen for secondary processing at the airport and joked, “There are signs everywhere saying: ‘The use of cell phones is strictly prohibited.’ I’m sure they won’t mind mechecking my text messages, I think. I mean, after all, I am white.”

I don’t believe Sacco deserved the consequences that followed, but I do believe the joke was insensitive, and it’s not because she didn’t word it correctly. In fact, unlike Ronson, I don’t believe his joke was properly worded either. They’re both jokes that are insensitive. I get they’re not actually racist, and are instead sarcastic, but that doesn’t make it funny either. What’s so funny about sarcastically boasting your white privilege? As someone who isn’t white, and is in fact almost always chosen for secondary processing at the airport, it strikes a nerve in me.

That’s not to say I’m offended by this book. I think that would defeat the purpose of his message altogether. I’m just saying that was a small thing that irked me, and his insistence on bringing up the injustice of Justine over and over again kept reminding me how unfunny I thought the jokes were. It was a fly that kept buzzing in my ear that I just kept hoping would go away. What happened to her was awful, but it doesn’t mean it should take over his novel. Honestly, I skipped the afterword section of the book, because guess what? It focused on Justine’s life and people’s reception of it after the book was published.

Overall, I learned a lot from this book. I think, like many, I’ve put on my social justice warrior hat in the past, and thought “oh this person deserves to be condemned for what they’ve said/done.” Now, I’m weary of that. People deserve the chance to learn and grow without being hounded by death and rape threats. Besides, who are we to judge? Are we really holy enough to think we should be the ones to decide who will get fired or ruined because of this or that? That being said, I do believe the story’s message would’ve been stronger had Ronson learned to move on from Justine Sacco, and perhaps focused more intently on other victims who’ve been publicly shamed. Certainly, it would’ve made his story less repetitive.

looking for something specific?

Surprise! I have a shop and it’s now officially open so link in my bio!!
rough times mean you get bangs and read an Acevedo book: I don’t make the rules.
purely taken because it’s the last day of April and this is my favorite calendar page 💫
finally got to mess around with some paint ✌🏼 .
just a blurry bean with one of her favorite books 🌱
The year is 2020! ✨

Surprise! I have a shop and it’s now officially open so link in my bio!!
rough times mean you get bangs and read an Acevedo book: I don’t make the rules.
purely taken because it’s the last day of April and this is my favorite calendar page 💫
finally got to mess around with some paint ✌🏼 .
just a blurry bean with one of her favorite books 🌱
The year is 2020! ✨
Loading Comments...
Comment
×
%d bloggers like this: